Premia Spine recently announced the publication of one-year outcomes from the TOPS facet replacement system’s clinical trial which found that lumbar facet arthroplasty with the TOPS device demonstrated a statistically significant improvement in all patient-reported outcome measures, a low surgical complication rate, and the ability to maintain motion at the index level while limiting sagittal translation.

The publication marks the first analysis of early clinical outcomes and complications from the TOPS IDE trial. According to Premia Spine, the study will help surgeons more accurately counsel patients on the best treatment for lumbar spinal stenosis and degenerative spondylolisthesis.

“The one-year data from this study indicate the TOPS system compares favourably in all respects to outcomes reported in the literature after single-level TLIF,” said Pinter. “If at the conclusion of the ongoing clinical trial we see continued favourable outcomes, that would indicate that motion preservation with TOPS facet arthroplasty is a viable alternative to fusion for restoring segmental stability while maintaining motion at the affected segment.”

A total of 153 patients were enrolled in the investigational arm of the clinical trial and underwent implantation of the TOPS device, with 145 TOPS devices implanted at L4–5 (94.8%), and eight devices implanted at L3–4 (5.2%). Sixty-nine percent (105 patients) of the 153 subjects reached their one-year follow-up at the time of this interim assessment, and were included in the patient-reported outcome measures (PROMs) and radiographic analyses.

Lumbar facet arthroplasty with the TOPS device demonstrated a low complication rate, significant improvement in all PROMs, and the ability to maintain motion at the index level while limiting sagittal translation. The complication rates and improved postoperative PROMs are similar to those reported in the literature following single-level TLIF. No patient in the TOPS cohort required reoperation within the first year owing to adjacent segment degeneration.

Ron Sacher, Premia Spine CEO, said: “We are encouraged by the data presented in this publication, which show promising results for TOPS when compared to TLIF. Unlike standard fusion constructs, the purpose of the TOPS device is to maintain motion at a previously pathologic intervertebral segment. These data indicate we are getting closer to our goal of providing a viable alternative to fusion for those suffering from lumbar spinal stenosis and degenerative spondylolisthesis.” 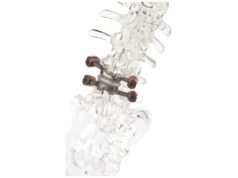