Hydrogels have been used for a number of years to treat DDD, but the current study is the first test of this particular gel in humans, according to an SIR press release.

After six months, all participants in this small study reported significantly less low back pain—declining from an average self-reported pain level of 7.1 down to two on a scale of 0 to 10. They also experienced greatly improved physical function, with average scores falling from 48 to six on a questionnaire to gauge the impact of low back pain in preventing patients from the ability to perform normal activities.

“If these findings are confirmed in further research, this procedure may be a very promising treatment for chronic low back pain in those who’ve found insufficient relief from conservative care,” said lead author Douglas Beall, chief of radiology services at Clinical Radiology of Oklahoma (Edmond, USA). “The gel is easy to administer, requires no open surgery, and is an easy procedure for the patient.”

The gel used in the study, Hydrafil, is a second-generation hydrogel developed by ReGelTec. In 2020, it received US Food and Drug Administration (FDA) breakthrough device designation, which allows expedited review when early evidence suggests an experimental product may provide more effective treatment than current options for treating a serious condition. Beall is a medical advisor to the company.

The research team enrolled 20 patients, aged 22 to 69, with chronic DDD low back pain. Each described their pain as four or higher on the 10-point scale. None had found more than mild relief from conservative care, which includes rest, analgesics, physical therapy, and back braces.

Patients were sedated for the procedure, and the gel was heated to become a thick liquid. Guided by fluoroscopic imaging, researchers used a 17-gauge needle to inject the gel directly into the affected discs, where the gel filled in cracks and tears, adhering to the disc’s centre and outer layer.

“We really have no good treatments for degenerative disc disease, aside from conservative care,” said Beall. “Surgery is statistically no more effective than conservative care and can potentially make things worse; nerve ablation is appropriate for only a few patients; and existing hydrogels are inserted through an incision as a soft solid, which can pop out of place if you’re not highly skilled in placing it.”

“Because this gel is injectable, it requires no incision, and it augments the whole disc, restoring its structural integrity, which nothing we have currently can do,” he added. 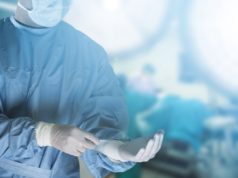